I was hosted by Medieval Times for dinner but the views and opinions are my own.

Game of Thrones fans will love Medieval Times!  Medieval Times Dinner & Tournament is the perfect place to get in the Game of Thrones mindset. Led by a Queen as powerful as Daenerys Targaryen (or Cersei Lannister, depending on who you’re rooting for in the battle of the seven kingdoms), this immersive experience transports you back to the medieval ages – there’s even a medieval torture room that might make you think of Ramsey Bolton and poor Theon Greyjoy. 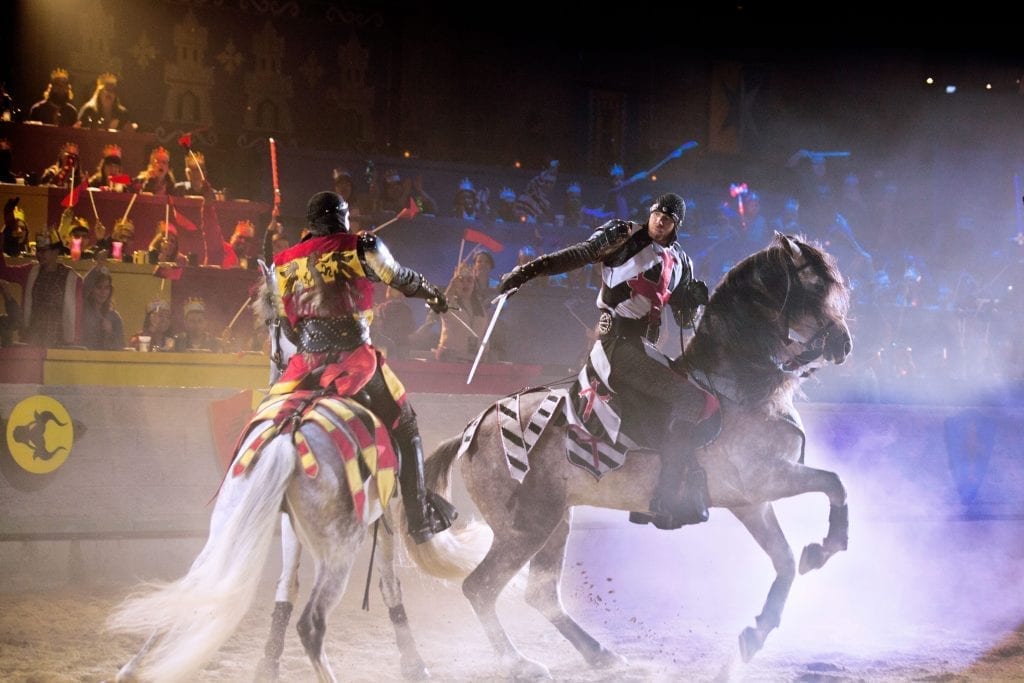 
Fans who have been waiting for the finale to this epic story will love the drama and action during the show, which features jousting, horsemanship, and a knightly tournament.  The four-course feast – served with no silverware to heighten the medieval spirit – is an experience not to be missed!

My family and I had a chance to experience Medieval Times in Atlanta for the first time and we loved it!  We knew about Medieval Times from advertisements and had heard from friends how fun it is, but just hadn’t had the chance to experience it ourselves.  My favorite portion of the dinner show was the falconry and it was amazing that the falcon was named Autumn!  Falconry dates back to 2000 BC when birds of prey started being used for hunting and sport.  Watching the bird sore around the arena was an incredible experience.  Fun fact about falcons, on average most falcons can fly up to 50 miles an hour and have been known to descend up to 250 miles per hour.  That is fast!

Me with my family enjoying our feast.

Medieval Times recreates an era when royalty gathered for tournaments and feasted while watching knights compete on horseback.  Their dinner theatre takes you and your guests out of today’s world and back to 11th century Spain where they are treated like royalty.  There are several locations in the United States to choose from.  To find a location near you click HERE.

Get Social with Medieval Times!

We hope you enjoyed Simply Amazing Living’s Medieval Times is Calling for All Game of Thrones Fans! post.

Crave Pie is now open in Alpharetta! My son and I

ParkMobile is really the Smarter Way to Park. #ad

Another Oscar viewing party in the books with my d

Had an amazing night tasting all of the delectable

The 2nd issue of The Georgia Hollywood Review is n

Merry Christmas! Testing out the camera on my new

Had an amazing time at Rock the Runway fundraising

#AD I went to the store to purchase Tampax Radiant

VOLTA by Cirque du Soleil’s VIP Experience is am

Had an amazing time at the Porsche Experience Cent

My husband has always been big on wanting our kids

When my daughter gets home from school, she heads

The Tower of London and the Cutty Sark were on my

Today is Giving Day for Apes! "It's Their Time To