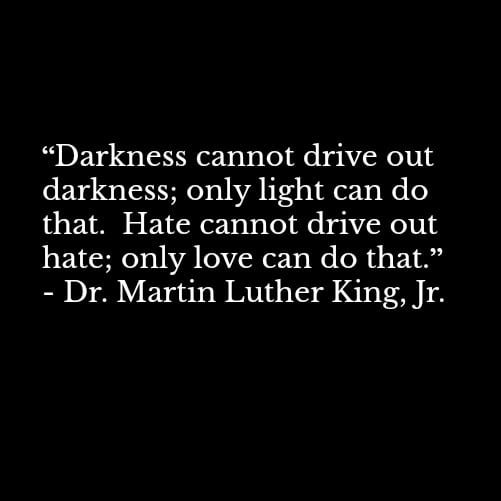 I will never forget when I heard the first Martin Luther King day was announced during morning announcements in my junior year in high school in Havana, IL.  The announcements had just finished and the bell rang for us to go to our first class of the day.  As I was walking from my homeroom class to first period, I overheard some boys walking behind me asking each other – “Why do we have to take a day off of school for a nigger?”

As I have written about, I was the only biracial child born and raised in my hometown of Havana, IL at the time.  Well, technically I was born at the hospital in Canton, IL as that was the nearest hospital when my mother was pregnant with me, but I lived in Havana from the time I was released from the hospital and until the summer of my high school graduation.  My mother is Caucasian and my father is African American.  You can read more about my history in the My Story section of this site. 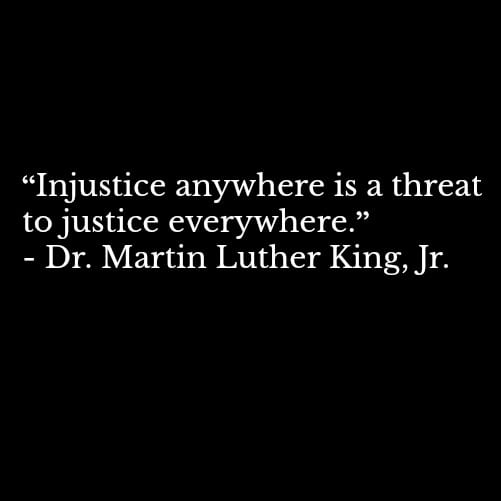 Who Wouldn't Want a Day Off?

I couldn't believe that they were upset about getting a day off from school?  It was not like we were getting a day off to celebrate Hitler's birthday.  Martin Luther King was a peaceful man that tried to get equality for all. The problem I think back then and in some people's minds still, is that people thought he was trying to get special privileges for black people and possibly take something away from white people.  They didn't see the inequality because they weren't taught about the facts of history.  We only had one chapter about slavery in our social studies class. How is that even possible?  Slavery lasted for 244 years in the United States and we get one chapter about it?   You can't erase history or change it to be what you want it to be.  You might be able to cover details up for a while, but eventually, all truths will eventually be known whether you want them to be or not.

I didn't say anything to those boys as it wouldn't have changed their minds anyway.  My goal in high school was to make enough money so I could move as far away as possible and live with people of all races, religions, and ethnicities.  The summer after I graduated from high school, I moved to Atlanta – – the home of Dr. Martin Luther King, Jr.

The Civil Rights Act of 1964 had only passed twenty-two years prior.  The Civil Rights Act ended segregation in public places and banned employment discrimination on the basis of race, color, religion, sex or national origin.  Mindsets don't change overnight, especially when parents want to hold on to the ways of the past and continue to teach their children what they believe to be true vs. what the actual truth is.

I truly believe we are born with love in our hearts and that hatred and/or racism is taught or learned by example.

My mother through adoption would always talk about what Dr. Martin Luther King, Jr. did wrong instead of focusing on what he did right and what he tried to do for justice and equality for all.  No man is perfect and we all have flaws and sin.  Instead of focusing on the positive, she focused on the negative because she didn't want change.  I'll go into more detail in another post on how she used to call me “jigaboo” and “spear-chucker” and wouldn't allow me to say “so” because it sounded like”soul.”

I didn't understand the names she was calling me or why “soul” would be considered bad.  However, I could tell by the look in her eye and the tone of malice in her voice that they weren't positive remarks.  I remember the time when my brothers and I were playing hide and seek, and I hid in a closet.  She opened the door and told me she could find me by the whites of my eyes.  For years, I would try to take a mirror in the dark to see if I could see the whites in my eyes. I eventually gave up.  I found out later in life, after researching and obtaining knowledge on the plight of African Americans that she was talking down to me because of my black heritage and she hated me for it.

I went back to my hometown for a wedding recently and was overjoyed to see the MLK holiday posted on the electronic sign outside of my high school.  I would like to think that the majority of people living in my hometown approve of MLK's accomplishments and equality for all.

Note:  There were people who believed in diversity and equality for all living in my hometown at the time, they didn't all believe in the negativity that we were not created equal. In fact, I was able to change the views of some individuals who learned just by being around me that there was no reason to exclude me or deny my friendship based solely on the color of my skin.

I believe as do so many others in history, that exposure and education are the keys to accepting one another regardless of our differences.  I know this is true because I lived this experience.

Do you remember your experience with your first MLK Day?  If so, please share it below.

Get Social with the King Center!

Get your free, exclusive quote with The AARP Auto Insurance Program from The Hartford. Enjoy the benefits you deserve, like Accident Forgiveness and Disappearing Deductible‡.