I received complimentary concert tickets for the Joan Jett and the Blackhearts concert. However, as always, the thoughts and views expressed in this article are my own.

Joan Jett and the Blackhearts Rocked The Fred in Peachtree City

I've had the pleasure of seeing Joan Jett and the Blackhearts in concert twice – –  once at Chastain Park in Atlanta in 2010 and just recently at “The Fred” in Peachtree City.  I have idolized the Rock-n-Roll Hall of Fame Inductee since I first heard her amazing voice belt out “Cherry Bomb” in the 70's when she was with The Runaways.

As I have detailed in the “My Story” section of Simply Amazing Living, my childhood was not an ideal one.  Being physically abused while with my birth mother and then being adopted into a family where I was sexually abused, I looked to music as an outlet for enduring my childhood terrors.

Joan Jett and her rebellious songs empowered me and gave me strength from the minute I first heard her voice and saw in her music videos how badass she is.  Her entire persona exudes feminine power and strength.  I hope she knows how many girls and women she has empowered and given strength through her music.

Joan Jett secured her rock goddess status through eight platinum and gold albums and nine Top 40 singles including “Bad Reputation,” “I Hate Myself for Loving You,” I Love Rock ‘N’ Roll,” and “Crimson and Clover.”

Joan Jett and the Blackhearts Sell Out “The Fred”

Joan Jett and the Blackhearts are still rocking and selling out concert venues around the world.  Their recent stop at Peachtree City's “The Fred” did not disappoint.  Joan Jett hasn't slowed down at all and still has her rock moves and commanding vocals that keep audiences on their feet and singing along to all of her hits.

I was slightly disappointed that she didn't sing one of my favorite songs – “ACDC.”  But, she sang all of my other favorites so I can't complain.  I was able to bask in her presence from the second row and I loved every minute of it.

The Fred is the perfect outdoor venue for music lovers!  It is the premier amphitheater in Peachtree City, GA, and hosts world-famous acts and local talent with state of the art production.  There really isn't a bad seat in the intimate setting of the outdoor amphitheater. Bad Reputation focuses on the life and career of rock ‘n’ roll icon Joan Jett from her early years ripping it up onstage as the founder and backbone of hard-rock legends The Runaways, to her longtime collaboration with Kenny Laguna as Joan Jett and the Blackhearts, and her enduring presence in pop culture as a rock pioneer and mentor. 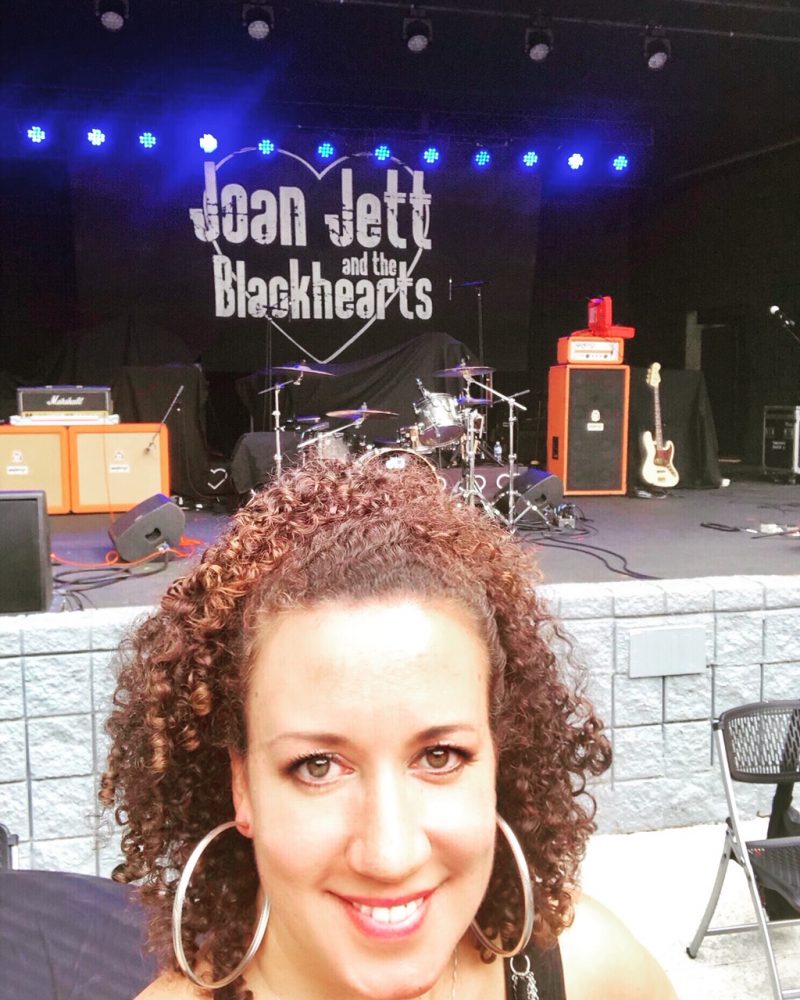 Thank you Visit Peachtree City for the concert tickets!

Peachtree City is a must-see location when traveling to the Atlanta area.  Expedia.com recently named Peachtree City, GA as the  Number One City that Must Be Seen in 2019!

Peachtree City is located just 25 minutes from Atlanta Hartsfield-Jackson Airport and has eight hotels, more than 100 restaurants to choose from, and multiple recreational and entertainment activities.

One of the many highlights of Peachtree City is the transportation mode – golf carts!  Most of the restaurants, attractions, and activities are golf cart accessible and visitors and locals can be found at all hours of the day cruising on the city's more than 100 miles of paved multi-use paths to get to and from their destinations.

Created in the 1950s, Peachtree City is a master-planned community which means in addition to their strategically planned paths, we have ample green space, tree-lined roadways, three sparkling lakes, scenic views, and the ultimate setting for relaxation for everyone.

Get Social with Visit Peachtree City!