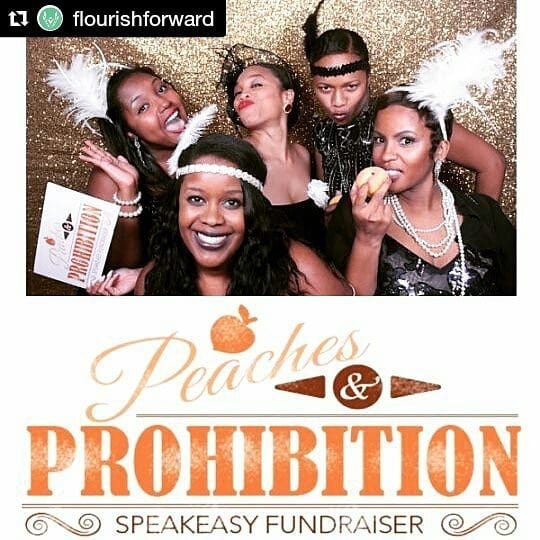 The Flourish Foundation hosted its second annual fundraiser and Speakeasy – Peaches & Prohibition – at the secret location of the Edgewood Speakeasy.  The Edgewood Speakeasy was the perfect location for the 20's themed event as it is a creative cocktail bar with exposed brick walls & low lighting, hidden at the back of the Bone Lick BBQ restaurant and Whiskey Joint.

Attendees were dressed to the nines with the ladies in flapper-style attire and the gentlemen in tweed suits and wingtip shoes. Highlights of the event included handcrafted cocktails, tasty bites, and live jazz.   Proceeds from the event benefit the Flourish Foundation, Inc.

Unfortunately, those who do not possess these traits combined with social and economic hardships often result in failure. The Flourish Foundation, Inc. is focused on developing programs that provide support for economically disadvantaged youth who seek the opportunity to gain valuable personal development tools and receive support for academic achievement.

About The Flourish Foundation, Inc.

In 2012, The Flourish Foundation was formally incorporated by Sherie Hodge after spending the majority of her career in the news industry. While working on countless editorials highlighting the country's social-economic challenges, it became clear why change was needed on both national and regional levels. With her ongoing volunteer work, engaging with residents at several local women's shelters, and recognizing the parallel between her own personal childhood obstacles, Hodge was compelled to heighten her involvement in the community and create an organization that focused on self-development. She began her philanthropic journey by connecting a small group of mothers who shared the same belief—young girls who lack self-esteem, fewer resources, or positive role models should always have an opportunity to grow.

The organization strongly believes that it is their duty to ensure that young ladies have the emotional support needed in order to thrive. The mission derives from the dire need for more accessible programs that were focused on building positive self-esteem through quality self-development programs. Today, thousands support the Flourish movement by contributing their time and resources to ensure that there are more options available to those who desire to succeed.

They believe that it is vital for our young women to be encouraged and that failure, based on circumstance, should never be an option.

Get Social with The Flourish Foundation, Inc.