When I first heard that Former First Lady Michelle Obama announced her tour of the United States to promote her book “Becoming,” I wanted tickets.

Little did I know that my husband would surprise me with exclusive VIP Meet and Greet tickets to see former First Lady Michelle Obama on her Becoming memoir book tour in Dallas!  For details on how the surprise took place, you can read about it in my article here. 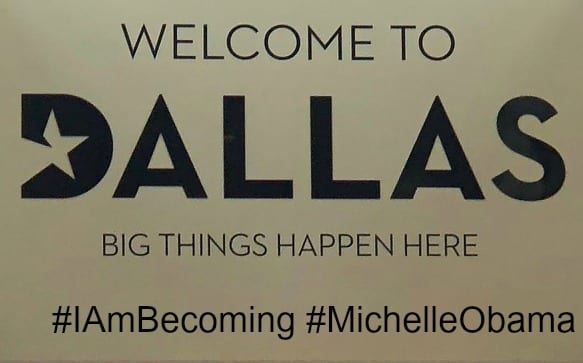 When we checked into our hotel room (my friend Charis was with me as her husband also surprised her with tickets), we turned on the television to the local Dallas news and saw that Michelle Obama had surprised students at the Margot and Bill Winspear Opera House during their annual Young Women's Leadership Conference.

It was amazing to see dozens of young women from community groups discussing their thoughts on her book Becoming during one of the conference sessions when the former First Lady walked in and surprised the students.  She was met with cheers, a few tears, and overwhelming admiration.

We arrived at check-in around thirty minutes before we were expected to arrive to make sure we were able to get into the VIP reception.  The information we had about the event specified that late arrivals would not be allowed into the reception, only the presentation following the reception.  We were not taking any chances with arriving late as we were not giving away our shot at meeting Michelle Obama!

As we were waiting in the VIP reception line, we see Chris Bosh, former NBA player, and Dallas local, in the reception line with his wife and young daughter.  He was kind enough to take a photo with me after I asked his wife's permission.

As we anxiously stood in line to meet her, we looked at the people around us.  There appeared to be around 150 in attendance and everyone was dressed to the nines.  I can imagine we were all thinking the same thing, that if you are going to get a picture with Former First Lady Michelle Obama, you want to look your absolute best!

When I found out that I was going to meet Former First Lady Michelle Obama, I immediately wondered if I could receive one of her famous hugs.  I have said numerous times that I want a hug from Michelle Obama before I leave this earth.

When it was our time to approach her, she greeted us by saying our names.  I know she was given our names ahead of time, but it still freaked me out just a little to hear Michelle Obama say my name!

And then she opened her arms and hugged me!  I got my wish!  As I was hugging her, I told her that I couldn't believe I was hugging Michelle Obama and I might have jostled her a little in my excitement.  She just laughed and then turned to hug my friend.

When They Go Low, We Go High

As they were telling us where and how to stand for the photo, I thanked her for continuing to go high as they continue to go lower.  She looked at me and said, “There certainly is a lot of low in the world right now.” And I agreed.  We took our picture and as we were leaving she held my hand and said: “Thank you.”

At that point, I could barely walk out of the room.  The security must have sensed my instability and told me that we could take the stairs instead of the stairsteps as we had entered.

I am just so proud of myself that I didn't break down and cry and that I was able to talk to her without sticking my foot into my mouth!  Meeting her was simply amazing!

Hugging is how I connect to people – how I show warmth and make folks feel at home.”

A Conversation with Michelle Obama

We had seats in the center of the 7th row.  As we were waiting and everyone was getting to their seats, videos were being played on the flat screens.  Videos from her on Ellen, the Jimmy Fallon show, James Corbin and so many others.

Also, pictures from her childhood and throughout her life were being shown set to some of Michelle's favorite musical artists (Stevie Wonder, Lauryn Hill, Diana Ross, and a host of others).  Some people were dancing and a lot of us were singing along with the music.

When it was time for the program to start, Mark Cuban and a few other Dallas locals got on stage to say a few inspirational words before Michelle Obama was introduced.  Mark Cuban had his two young daughters with him and expressed his views on the importance of diversity and female leadership and inclusion. 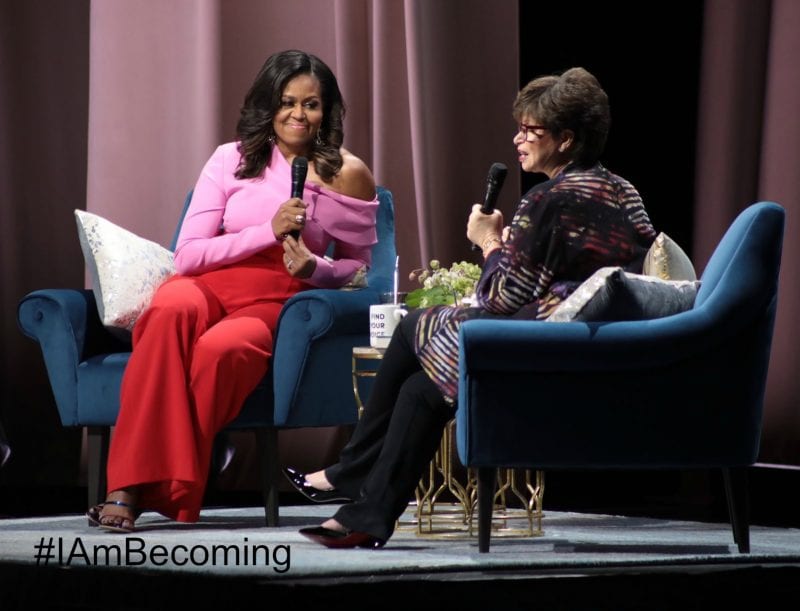 Former President Barack Obama's senior adviser Valerie B. Jarrett brought a gracious and personable perspective to the conversation as a moderator.

When Valerie introduced Former First Lady Michelle Obama, the crowd immediately stood up and gave her a standing ovation. And then for over 90 minutes, she held a microphone and answered Valerie's questions in front of a transfixed audience that was hanging on every word she said.

During the “Conversation” as in the book, Michelle described her growth from the South Side of Chicago to First Lady of the United States, through stories of empowerment and overcoming adversity.

The entire event from meeting her to watching her presentation was extremely empowering.  Everyone in the room was happy and there was such a positive vibe that it seemed infectious.  In my opinion, Former First Lady Michelle Obama is an inspiration and a global treasure.

I love her compassion for others and her ability to remain classy no matter what is said about her.  She knows who she is and she knows the sky is the limit to what she can achieve.  I thank her for writing her book and for wanting to help others “become” who they were always destined to be.

Included in our VIP Meet and Greet package was an autographed copy of Becoming and a Gift Bag filled with lots of Goodies!

A recipe book by Sam Kass, Anastasia Beverly Hills makeup, a Motown Magic CD, a hat from the Ellen Degeneres Show, a water bottle, a free exercise class at Barry's, a few postcard-sized pictures of Michelle Obama, a VIP “Becoming” lanyard, and all the items came in a sweetgreen recyclable bag.

Get your copy of “Becoming” by Former First Lady Michelle Obama today!